Our testing lab in Fort Worth is well-equipped to perform all necessary laboratory work associated with the expansive clay soils found in Ellis County and the surrounding areas. Our expertise includes moisture-conditioning of soils, lime stabilization, and other soil treatments. Our construction materials testing team has an excellent reputation of providing support all the way to project delivery.

Everything you see around you is supported by or built on soil or rock. Geotechnical engineers are responsible for designing the foundations and soil interface for that. Anything that is not supported by soil or rock, either floats, flies or falls down.

What is Geotechnical Engineering?

Geotechnical engineering is the science that explains mechanics of soil and rock and its applications to the development structures on the earth. It includes, without being limited to, the analysis, design and construction of foundations, slopes, retaining structures, embankments, roadways, tunnels, levees, landfills and other systems that are made of or are supported by soil or rock.

The following 7 minute video by the International Society of Soil Mechanics and Geotechnical Engineering gives a great overview of the geotechnical engineers field of practice.

Every piece of land planned for a building should have the soils investigated. The building will site on the soil – the soil will be the foundation of it. So, you should know how much strength the soil has. Is it rocky soil or sandy soil, or does it have a lot of clay in it? Are there faults in it? Are there sinkholes in the area? All of these questions should be answered BEFORE the building is started. Many buildings, bridges, and retaining walls have failed because this step was ignored. 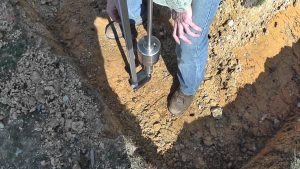 Soils are composed of three materials – Rock or Mineral Particles, Water, and Air. We are very familiar with the reaction of water so we usually only worry about testing the soils. We do however want to know how wet the soil is. Generally, wet soils doesn’t behave well for engineering applications. 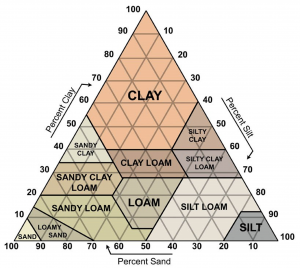 Soil is composed of particles that are categorized into groups according to their size. One method of classifying soils is to measure the relative amounts of sand, silt, and clay in a soil sample, then use a soil triangle to determine the soil type. On the USDA texture triangle shown here, each particle size has its own line direction as shown by the arrow associated with the particle size names. To find the texture designation, follow the line associated with the percent of the given size group until the line meets up with those from the other two particle sizes.

This method is used alone for many purposes – agriculture, septic systems, simple foundations. Use this classification method if you are concerned with the properties of soil related only to its composition. Here, the percentages of the soil that is sand, silt and clay are obtained from laboratory tests. It is then used to determine the textural soil classification. The USDA textural triangle chart is used to determine the classification. The corners of the triangle indicate the purest of either sand, silt, or clay. The other nine (9) classifications are combinations of two or three of these. The summation of the percentage of sand, silt and clay should give 100%. 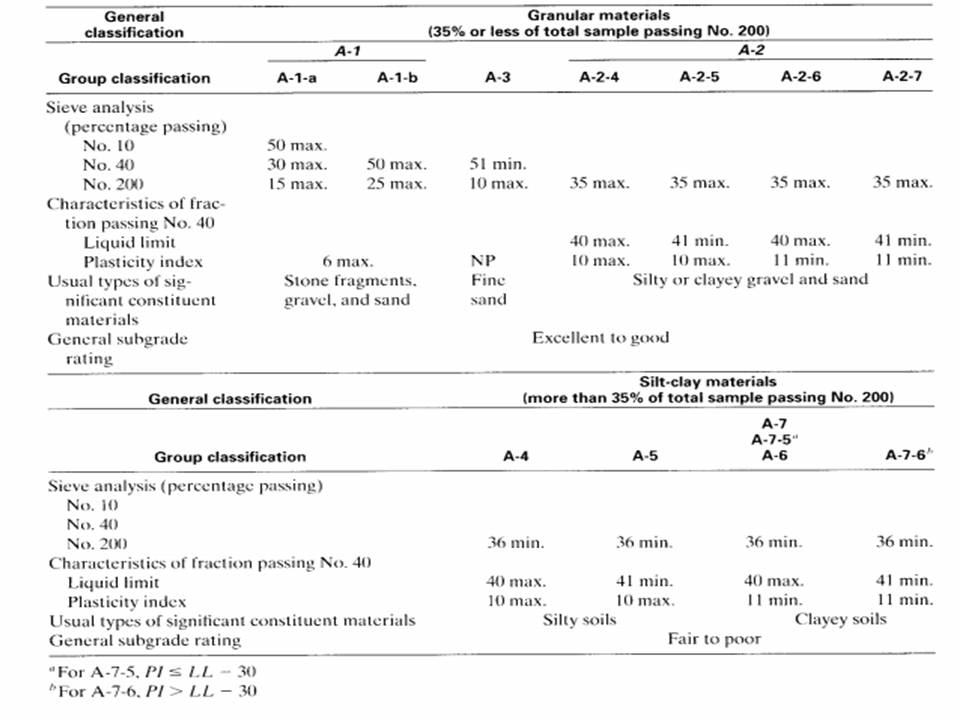 The first step is to perform a sieve analysis. When 35% or less by weight of the soil granules pass through the No.200 sieve, the soil will belong to any of the categories from A1 to A3. If more than 35% passes through the  200 sieve then the classification will be from A4 to A7. 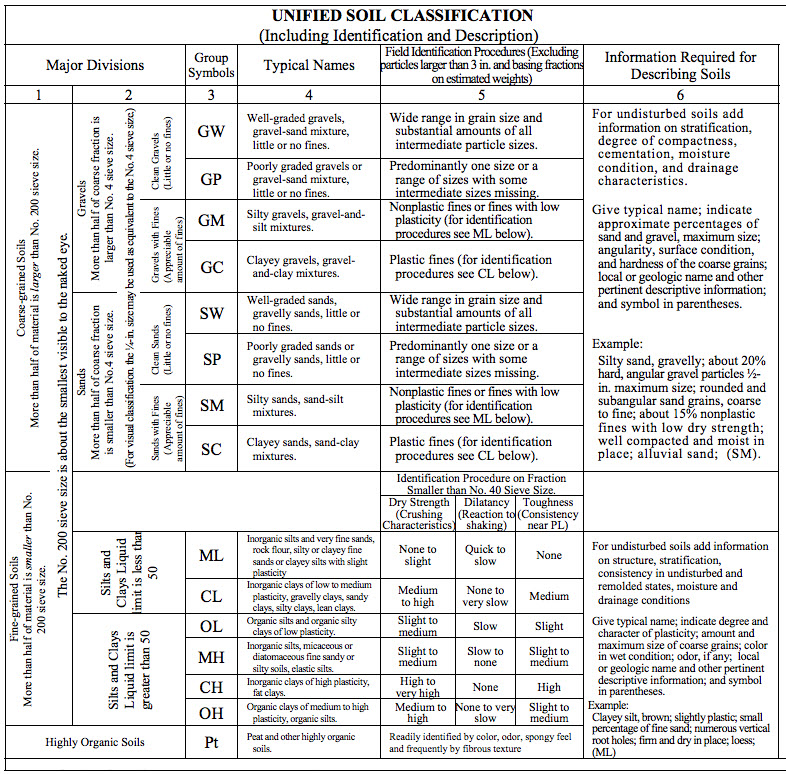 This is the most common method used by civil engineers and geotechnical engineers world-wide to classify soil for their construction purpose – other than highway engineering. In this classification type the soil type will be noted as a two letter symbol, in which the first letter defines the type of soil and the second letter defines the quality of soil. To classify the soil, the Unified chart prepared on the basis of laboratory sieve test will be considered mainly.

The USCS is based on identifying soils according to their textural and plasticity qualities and on their grouping with respect to behavior. Soils seldom exist in nature separately as sand, gravel, or any other single component. They are usually found as mixtures with varying proportions of particles of different sizes; each component part contributes its characteristics to the soil mixture. The USCS is based on those characteristics of the soil that indicate how it will behave as an engineering construction material. The following properties have been found most useful for this purpose and form the basis of soil identification. They can be determined by simple tests and, with experience, can be estimated with some accuracy.

• Percentages of gravel, sand, and fines (fraction passing the No. 200 sieve).
• Shape of the grain-size-distribution curve.
• Plasticity and compressibility characteristics. In the USCS, the soil is given a descriptive name and a letter symbol indicating its principal characteristics.

The Standard Penetration Test (SPT) uses a thick-walled sample tube that is driven into the ground by blows from a falling slide hammer. The number of blows required for the sample tube to penetrate the soil at 6-inch intervals is called the “Standard Penetration Resistance” or the “N-Value.” The blow count gives an indication of the density of the ground and it is used in many engineering applications. This test is used mainly in sands and gravels.

The Cone Penetration Test (CPT) uses a instrumented cone that is pushed into the ground at a controlled rate of speed. The instruments measure